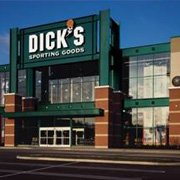 Cabela’s is a great place to buy almost everything you can find at Dick’s Sporting Goods. Cabela’s is a Sidney, Nebraska based chain of retail stores that operates over 60 outlets across the United States. Last year, Cabela’s generated more than 4 billion US Dollars in revenue.

The wide selection of fishing, camping, hunting and gear makes Bass Pro Shops another very good alternative to Dick’s Sporting Goods. Bass Pro Shops was founded in the year 1971 and the headquarter of the company is located in Springfield, Missouri. Presently, the company employs over 20000 people. Last year, Bass Pro Shops generated over 4.5 billion USD in revenue.

Gander Mountain is a privately owned American company that specializes in apparel, equipment and accessories for hunting, fishing, camping and outdoor recreation. Headquartered in Saint Paul, Gander Mountain was founded in the year 1960. The quality of products sold by Gander Mountain is comparable to Dick’s Sporting Goods. Last year, Gander Mountain generated almost 5 billion US Dollars in revenue.

Sports Authority is one of the major retailers of sporting goods in the United States. Sports Authority features clothing, footwear, accessories and outdoor gear from top 100 brands. Some of the famous brands at Sports Authority include Adidas, Brooks, Bushnell, Coleman, Merrell, The North Face and many more. Headquartered in Englewood, Colorado, Sports Authority was founded in the year 1928. Presently, the company operates over 450 stores across the country.

REI is a Washington based chain of retail stores that offers high quality clothing, footwear and sporting equipment (e.g. for cycling, for camping and for snowboarding etc.). REI can be a great alternative to Dick’s Sporting Goods for you to buy latest gear, high quality cold weather boots and clothing for men, women and kids.

Arc’teryx (previously known as ROCK SOLID) is famous for its leading innovations in world-class outdoor equipment that are primarily used in Rock Climbing, Hiking, Snowboarding and Skiing. Headquartered in North Vancouver, Canada, Arc’teryx was founded in the year 1989. If you are an existing Dick’s Sporting Goods customer, I’m sure you’ll love Arc’teryx products too.

Backcountry is another popular online retailer and a good alternative to Dick’s Sporting Goods to buy clothing and outdoor recreation gear for camping, rock climbing, ice climbing, and biking etc. Headquartered in Park City, Utah, Backcountry was founded in the year 1996 by Jim Holland. Backcountry showcases clothing and outdoor equipment from over 1000 top US brands including Levi’s, Columbia, Patagonia, Nike, and many others.