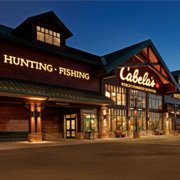 Cabela’s is an American, publicly traded business that markets and sells high quality sporting goods. Some of the most popular product categories at Cabela’s Stores include hunting, fishing, camping and shooting. Headquartered in Sidney, Nebraska, Cabela’s was founded in the year 1961. Presently, Cabela’s operates 82 retail stores across United States & Canada. In this post I am going to introduce you to some of the best sporting goods stores like Cabela’s. All of similar stores offer great quality outdoor gear at comparable or low prices. Below is a list followed by some basic introduction and links to the official websites of Top 10 Stores Like Cabela’s.

The wide selection of fishing, camping, hunting and gear makes Bass Pro Shops a great alternative to Cabela’s. Bass Pro Shops was founded in the year 1971 and the headquarter of the company is located in Springfield, Missouri. Presently, the company employs over 20000 people. In the year 2015, Bass Pro Shops generated over 4.5 billion USD in revenue.

Orvis is another similar store like Cabela’s that specializes in high-end fly fishing, hunting and sporting equipment. Orvis is a family-owned business that was founded by Charles F. Orvis in the year 1856. Presently, Orvis operates over 70 retail stores across the United States. The headquarter of the company is located in Sunderland, Vermont.

Gander Mountain > #4, Everything You Need for Hunting & Fishing

Scheels (or Scheels All Sports) is a privately owned American company sells Activewear, Exercise Equipment, Shoes and a great collection of other sporting goods. Headquartered in Fargo, North Dakota, Scheels was founded in the year 1902. Presently, Scheels operates 26 Sporting Goods Stores across the United States and a full-featured eCommerce Website.

If you are an outdoor enthusiast and are looking for a good alternative to Cabela’s, I strongly recommend that you try Filson. Headquartered in Seattle, Washington, Filson is a privately owned business that specializes in high-end clothing and goods for outdoor activities. The price range at Filson may be a bit higher than other similar stores. But if you prefer quality over cheap price, I assure you that you’ll love the stuff offered by Filson stores.

Academy > #9, Similar to Cabela’s but Cheap

MidwayUSA is an American chain of retail stores that sells just about everything for shooting, hunting and the outdoors. Headquartered in Columbia, Missouri, MidwayUSA was founded in the year 1977. Like Cabela’s and other sporting goods stores on this page, MidwayUSA is a great place to buy Airguns, Archery, Black Powder Guns, Camping Supplies, Clothing and Footwear.