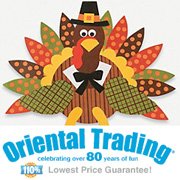 Party City is a publicly traded American chain of retail stores that was founded in the year 1986. Headquartered in Rockaway, New Jersey, Party City operates over 900 retail stores across the United States. Party City is a good alternative to Oriental Trading Company to buy cheap Party Supplies and Halloween Costumes.

S&S Worldwide > #2, Over 100 Years Of Experience Of Party Supplies

S&S Worldwide is a family owned business that specializes in Crafts Supplies, Party Supplies, Sports & Recreation Goods and School Supplies. Headquartered in Colchester, Connecticut, S&S Worldwide was founded in the year 1906. All products from S&S Worldwide come with a 100% satisfaction guarantee.

Shindigz is the world’s first online Party Superstore and one of the biggest names in Part Supplies in the United States. Originally founded in 1926, Shindigz launched its eCommerce store in the year 1999. Shindigz is another great alternative to Oriental Trading to buy Party Decoration, Party Costumes, Decorative Stuff, Personalized Invitations, Plates, Cups, Photo Stands and a lot more.

WCN > #6, Try This For Parties on Special Occasions

Michaels is an American chain of retail stores that specializes in Arts Supplies. Headquartered in Irving, Texas, Michaels Stores, Inc. was founded in the year 1976. Presently, the company operates 1263 arts & crafts stores across the United States and Canada. Last year, Michaels Stores generated almost 500 million US Dollars in revenue.

Dollar Tree is one of the best and very affordable stores to buy Floral Supplies, Party Supplies, Cleaning Supplies and a lot more. As the name suggests, everything sold at Dollar Tree costs $1 or less. This makes Dollar Tree the cheapest alternative to Oriental Trading Company.

Etsy is a popular ecommerce website that was founded by Robert Kalin and Chris Maguire in the year 2005. Etsy specializes in handmade or vintage items and supplies. You need to be a registered member of Etsy in order to buy something or sell your own products using Etsy Marketplace.