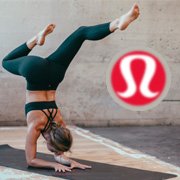 Lululemon (or Lululemon Athletica) is a Canadian retail chain that sells technical athletic clothes for yoga, running and workout. Founded in the year 1998, Lululemon is headquartered in Vancouver, Canada. Presently, Lululemon operates over 350 sportswear stores in several countries across the Americas, Europe, Asia & Oceania. In this post I am going to introduce you to some of the best athletic clothing stores like Lululemon. All of these stores offer similar quality stuff, while some of them are also cheaper than Lululemon. Below is a list followed by some basic introduction and links to the official websites of Top 10 Stores Like Lululemon.

Athleta is a famous American company that can be a great alternative to Lululemon to buy premium quality fitness apparel for women. Headquartered in Petaluma, California, Athleta is wholly owned and operated by world-famous clothing company, Gap Inc. The company was founded in the year 1998 and presently, Athleta operates over 100 retail stores across the United States.

Fabletics > #2, Similar to Lululemon but Cheap

Fabletics is an eCommerce store that specializes in sportswear for women. Headquartered in El Segundo, California, Fabletics was co-founded by Kate Hudson in the year 2013 with a mission to offer stylish and high-quality activewear at affordable price. Like Lululemon, Fabletics is a great place to buy outfits for Yoga, Running, Gym & Workout.

Under Armour is a publicly traded American company that specializes in sportwear and casual apparel. The company also offers a good range of footwear. Last year, Under Armour generated over 4 billion US Dollars in revenue. The quality of products offered by Under Armour is comparable to Lululemon.

Sweaty Betty is a London based chain of retail stores that sell activewear and sports equipment for women. Founded in the year 1998, Sweaty Betty operates almost 60 brick and mortar stores across the United Kingdom and the United States. Like Lululemon, Sweaty Betty’s eCommerce website gives you the option to shop from the convenience of your home.

Lucy Activewear is a subsidiary of VF Corporation that was founded in the year 1999. Lucy is another good alternative to Lululemon for women to buy activewear specially, clothing intended for use during Yoga. Presently, Lucy Activewear operates 60 retail stores across the United States. In the year 2015, Lucy Activewear stores generated over 500 million US Dollars in annual sales.

Victoria’s Secret is a subsidiary of L Brands that was founded in the year 1977. Victoria’s Secret is primarily famous for its very unique collection of sexiest bras and lingerie. However, Victoria’s secret can be a very good alternative to Lululemon to buy activewear, especially for Yoga & Gym.

Patagonia > #7, Sells Almost Everything You Can Find at Lululemon

In addition to sportswear and yoga clothing, Patagonia offers weatherproofed outerwear, fine-quality packs, gear and shoes for men, women and kids for freezing temperatures. I personally love their lightweight, windproof and water-resistant jackets. Headquartered in Ventura, California, Patagonia was founded in the year 1973.

The North Face offers and wide range of activewear, outerwear, fleece, coats and footwear. The company also sells a beautiful collection of outdoor equipment e.g. backpacks, tents and sleeping bags. The North Face was founded in the year 1968 and the headquarter of the company is located in California.

New Balance is a Boston, Massachusetts based multinational corporation that was founded in the year 1906. Presently, New Balance is one of the major suppliers of athletic shoes across the globe. Like Lululemon, the online store of New Balance also features a great variety of Sportswear for men, women, boys and girls.

Foot Locker is a Midtown Manhattan, New York based chain of retail stores that sells athletic footwear and activewear. Founded in the year 1974, Foot Locker operates over 3500 sportswear stores in 20 countries across the world, making it one of the best alternatives to Lululemon. Last year, Foot Locker generated more than 8 billion US Dollars in revenue.