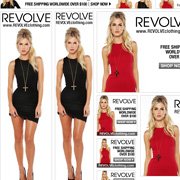 Revolve Clothing is a leading online fashion retailer that was launched in the year 2003. Revolve offers a carefully chosen collection of clothing, footwear, bags and accessories for women, juniors, men and kids. An impressive variety of original merchandise from hundreds of world-famous brands attract millions of visitors to Revolve Store, every single month. In this post, I am going to introduce you to some of the best alternatives to Revolve Clothing. All of these stores sell similar fashion brands, while some of them also offer extra discounts. Keep reading to discover a list followed by some basic intro and links to the official websites of Top 10 Stores Like Revolve Clothing.

Anthropologie is a subsidiary of Urban Outfitters that was founded in the year 1992. Headquartered in Philadelphia, Pennsylvania, Anthropologie is famous for its curated assortment of dresses and fashion accessories for women that makes it very similar to Revolve Clothing. Anthropologie also offers a huge variety of products for home furnishing and decor.

Farfetch is a Portuguese fashion retailer that features clothing, shoes, accessories and jewelry from luxury brands. Farfetch is another great alternative to Revolve Clothing to buy up to the minute styles for men, women and kids. Presently, Farfetch ships its products to more than 190 countries across the globe.

Fashionesta > #3, Up To 70% Discount on Designer Fashion

Fashionesta is a great place to shop designer fashion for up to 70% off than the regular price. Founded in the year 2003, Fashionesta is headquartered in Kirkland, Washington. The most popular fashion brands at Fashionesta include Ralph Lauren, Dolce & Gabbana, Gucci, Woolrich, Prada, and over 150 other sought-after brands.

Selfridges (or Selfridges & co.,) is a London, United Kingdom-based chain of department stores that was founded in the year 1909. Like Revolve Clothing, Selfridges Stores feature clothing, shoes and accessories for the entire family. Additionally, it is also a good place to buy Tech: Gadgets including Cameras, Phones, TVs, and a lot more.

Dillard’s is a publicly-traded business that was founded in the year 1938. Headquartered in Little Rock, Arkansas, Dillard’s presently operates over 330 department stores across the United States. Like Revolve, Dillard’s is a good place to buy clothing, shoes, bags, beauty products, and accessories for women, juniors, men, and kids.

Topshop is a London, United Kingdom based fashion retailer that specializes in clothing, footwear, cosmetics and accessories for women. Presently, Topshop operates some 500 retail stores in several countries across the world. Founded in the year 1964, Topshop is fully owned and operated by the Arcadia Group. If you are not too price-conscious, Topshop can be a good alternative to Revolve Clothing for you.

Asos is one of the major online retailers of fashion and beauty products. Headquartered in London, United Kingdom, Asos was founded by Nick Robertson in the month of June 2000. A collection of over 850 world-famous brands makes Asos a great alternative to Revolve Clothing. In the year 2015, Asos generated more than 1.6 billion American Dollars in annual sales.

Pacsun (originally Pacific Sunwear) is an affordable alternative to Revolve Clothing. Pacsun is famous for its unique range of casual clothing, inspired by the youth oriented culture and lifestyle of California. Pacsun is a publically traded company that was founded in the year 1980. Presently, Pacsun employs over 10,300 people in some 650 retail stores across the United States and Puerto Rico.

Dorothy Perkins > #9, Recommended For Women Between 25 to 35

J Crew is one of the major American retailers that offer premium quality clothing, footwear, and accessories for men, women, and kids. J Crew was founded in the year 1983 by Emily Scott. The headquarter of J Crew is located in New York, United States. The price range of clothing and footwear at this store might be a bit higher than Revolve Clothing. But I assure you, the quality of stuff at J Crew will never disappoint you.