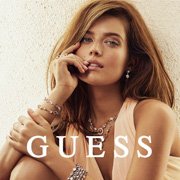 Guess is a publicly-traded American Fashion brand that specializes in a variety of products e.g. clothing for men & women, wristwatches, designer shoes, perfumes & jewelry. Headquartered in Los Angeles, California, Guess was founded in the year 1981. Last year, Guess stores generated over 4 billion US Dollars in revenue. In this post, I am going to introduce you to some of the best brands and stores like Guess. All of these stores offer similar and fine clothing and fashion accessories. Below is a list followed by some basic introduction and links to the official websites of Top 10 Stores Like Guess.

Calvin Klein is a wholly-owned subsidiary of PVH Corporation. The company was originally founded by world-famous American fashion designer Calvin Klein in the year 1968. Like Guess, Calvin Klein is also an amazing place to buy fine quality clothing for men and women, designer bags & accessories, original fragrances, and decorative stuff.

Armani > #3, One Of The Most Popular Italian Fashion Brands

Armani is a privately owned, high-end fashion brand that was founded by a world-famous, Italian fashion designer Giorgio Armani. Headquartered in Milan, Armani was first introduced in the year 1975. Presently, Giorgio Armani S.P.A is very popular for its finest collection of ready-to-wear for men and women, sunglasses, leather goods and other fashion accessories.

Diesel is an Italian clothing company that is primarily famous for its very high-quality denim jeans. Headquartered in Breganze, Italy, Diesel was founded in the year 1978. In addition to Denim Jeans, Diesel can be a great alternative to Guess to buy fine quality shoes, bags, wallets, belts, eyewear, and wristwatches.

Gap Inc., commonly known as Gap is a world-famous clothing and accessories retailer. Headquartered in San Francisco, California, Gap was founded in the year 1969. Some of the most popular product categories at Gap Stores include Jeans, Cotton Trousers, Shorts, Casual Shirts, T-Shirts, Polo Shirts, Sweaters, and Joggers. In the year 2015 Gap generated almost 17 billion American Dollars in annual sales.

Lacoste is a Troyes, France-based clothing company that was founded in the year 1933. Lacoste specializes in upscale clothing, footwear, and expensive perfumes. The company also offers a huge collection of high-quality leather goods, wristwatches, sunglasses, and polo shirts. If you are not too price-conscious, Lacoste can be a good alternative to Guess for you.

Versace (Gianni Versace S.P.A) is an Italian luxury fashion brand. Like most of the other fashion brands on this page, Versace is also headquartered in Milan and the company was founded by Gianni Versace in the year 1978. Versace can be a great alternative to Guess to buy fine quality leather goods. Last year, Versace generated almost 700 million American Dollars in revenue.