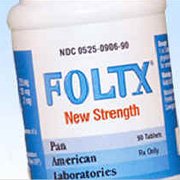 Foltx Tablet contains folate in the form of L-methylfolate which is the biologically active folate isomer, and vitamin B12, which means it works immediately in the body when absorbed. As co-enzymes, the B vitamins are essential components in most major metabolic reactions. They play an important role in energy production, including the metabolism of lipids, carbohydrates, and proteins.

The structure, binding, absorption, transport, metabolism, function, and interaction of Foltx (vitamin B12 and folates) and the polymorphisms of folate-related enzymes can be found elsewhere. A key interaction is that between vitamin B12 and folate in the synthesis of methionine from homocysteine by methionine synthase, in which both 5-methyltetrahydrofolate and methyl-vitamin-B12 are cofactors, a reaction that can be inhibited by nitrous oxide.

The folate cycle, which synthesize methyl groups, is essential for many genomic and non-genomic methylation reactions, via S-adenosylmethionine and, indirectly, for the synthesis of purines and thymidine and, therefore, of nucleotides, DNA, and RNA.

Why Take Foltx During Pregnancy / Lactation?

Folate and B12 deficiencies, health consequences:

The recommended dosage of Foltx is 1 to 2 tablets daily in the following conditions;

Do not use Foltx Tablets in case of known hypersensitivity to any of the components of this formulation.

Foltx is not an antidepressant. However, it may enhance the effects of antidepressant medications. Foltx may be used throughout pregnancy or while you are trying to get pregnant. You should not use Foltx if you have ever had an allergic reaction to l-methylfolate or vitamin B12.