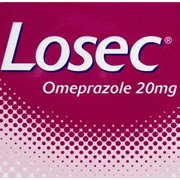 Losec (omeprazole) is well tolerated and side effects have generally been mild and reversible. The following events have been reported as adverse events in clinical trials or reported from routine use, but in many cases a relationship to treatment with Losec has not been established.

Losec Side Effects on Skin

Losec Side Effects on Nervous System

Does Losec Have Any Drug Interactions?

Plasma concentrations of Losec and clarithromycin are increased during concomitant administration. Results from a range of interaction studies with Losec versus other drugs indicate that Losec 20 – 40 mg given repeatedly, has no influence on any other relevant isoforms of CYP, as shown by the lack of metabolic interaction with substrates for CYP1A2(caffeine, phenacetin, theophylline), CYP2C9 (S-warfarin, Piroxicam, Diclofenac and naproxen), CYP2D6(metoprolol), propranolol CYP2E1 (ethanol), and CYP3A (cyclosporin, lidocaine, quinidine, estradiol).