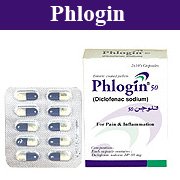 With a dose of 75 mg IM, the peak plasma concentration is attained within 10-22 minutes. Protein binding is 99.7%. Plasma half-life of Phlogin Injection is 1-2 hours. The active substance is excreted via the kidneys in the form of metabolites. Less than 1% excreted as un-changed drug in the urine. The plasma concentration does not rise even in the presence of severe renal failure.

Phlogin is indicated in all painful and inflammatory conditions including;

Phlogin (Diclofenac Sodium) may not be used in patients with hypersensitivity to the active ingredient, peptic ulcer, porphyria and disturbances of hematopoiesis. Phlogin is also contra-indicated in asthmatic patients in whom attacks of asthma, urticaria or acute rhinitis are known to be precipitated by acetylsalicylic acid or by any other agent with prostaglandin inhibiting activity.

Phlogin should be given with caution in patients with G.I.T. disorders, severe hepatic or renal damage. As with other drugs frequent blood count should be performed in patients on long term therapy. As with NSAIDs the patients who have just had heart surgery should not take Phlogin.