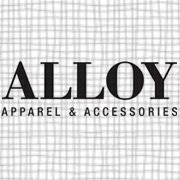 Alloy is an American fashion brand that specializes in tall and plus sized clothing for women. Alloy Apparel is famous for its unique offerings of a mix of trend-right, chic and sophisticated styles in everything from work wear to weekend lounge looks. Headquartered in New York City, the first Alloy Apparel store was founded in the year 1996. In this post, I am going to introduce you to some of the best alternatives to Alloy. All of these stores apparel stores offer similar quality clothing and accessories, while some of them are also cheaper than Alloy. Below is a list followed by some basic introduction and links to the official websites of Top 10 Stores Like Alloy.

Simply Tall (as the name suggests) is a great alternative to Alloy Stores to buy tall women’s clothing. Some of the most popular product categories at Simply Tall include leggings, Pants & Jeans (with long inseams of at least 36”) and activewear. Simply Tall was started as a tiny boutique in Warren, Ohio in the year 2004. Today it has grown to be a prospering business.

Asos is one of the major online retailers of fashion and beauty products. Headquartered in London, United Kingdom, Asos was founded by Nick Robertson in the month of June 2000. A collection of over 850 world-famous brands makes Asos a great alternative to Alloy. In the year 2015, Asos generated more than 1.6 billion American Dollars in annual sales.

Boohoo > #3, Clothing For Young Women On A Budget

Boohoo is a world famous online fashion retailer that specializes in trendy outfits, stylish footwear and fashion accessories for teenagers and young men and women. Boohoo can be another good alternative to Alloy because of its comprehensive collection of latest fashion clothing. The company launches over 100 new designs DAILY, offering a perfect combination of style and economy to its global audience.

JCPenney is a Plano, Texas based American chain of mid-range department stores that was founded in the year 1902. A good range of products e.g. Clothing, Cosmetics, Footwear, Electronics, Furniture, Jewelry & Home Appliances make JCPenney a good alternative to many stores including Alloy Apparel. Presently, JCPenney operates some 1100 retail stores across the United States.

Old Navy is one of my favorite retailers of tall and plus size clothing and accessories for men & women. Like GAP, Old Navy is also owned by GAP Inc. Old Navy is the first American Retailer to cross USD 1 billion in revenue within 4 years after the launch.

Lands’ End is can also be a good alternative to Alloy Apparel. Lands’ End specializes in clothing and shoes for men, women and kids. Some of the other popular categories at Lands’ End include home decor, beach towels, hats and school uniforms. Headquartered in Dodgeville, Wisconsin, United States, Lands’ End was founded the year 1963. In addition to the US stores, Lands’ End also operates several retail outlets across the United Kingdom, Germany, Japan, France and Austria.

The Limited > #8, Beautiful Variety Of Workwear For Women

The Limited is a Columbus, Ohio based chain of clothing stores that is fully owned and operated by Sun Capital Partners. Like Alloy, The Limited carries a beautiful range of “Wear-to-Work” apparel for young women. The Limited also offers an impressive collection of Jackets, Sweaters and fashion accessories for women.

Topshop is a London, United Kingdom based fashion retailer that specializes in clothing, footwear, cosmetics and accessories for women. Presently, Topshop operates some 500 retail stores in several countries across the world. Founded in the year 1964, Topshop is fully owned and operated by the Arcadia Group. If you are not too price-conscious, Topshop can be a good alternative to Alloy for you.