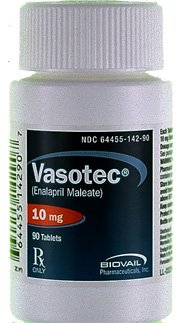 The following side effects have been associated with the use of Enalapril Maleate.

Dizziness and headache were the more commonly reported side effects. Fatigue and asthenia were reported in 2-3% of patients. Other Enalapril Maleate side effects that occurred in less than 2% of patients included hypotension, orthostatic hypotension, syncope, nausea, diarrhea, muscle cramps, rash, and cough. Less frequently renal dysfunction and renal failure have been reported.

Angioneurotic edema of the face, extremities, lips, tongue, glottis and / or larynx has also been reported rarely.

Side effects, which occurred very rarely, either during controlled clinical trials or after the drug was marketed are as under;

Enalapril Maleate Side Effects on Skin

Other Side Effects of Enalapril Maleate

A symptom complex has been reported which may include some or all of the following: fever, serositis, vasculitis, myalgia / myositis, arthralgia / arthritis, a Positive ANA, elevated ESR, eosinophilia, and leukocytosis. Rash, photosensitivity or other dermatologic manifestations may also occur with the usage of Enalapril Maleate.