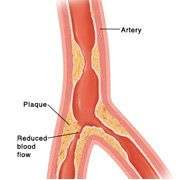 Angina Pectoris results from an imbalance between myocardial oxygen supply and demand, and in most cases is due to fixed atheromatous obstructions in the larger epicardial coronary arteries. Coronary artery spasm also causes angina pectoris but is unusual in the absence of at least some evidence of atheromatous plaque disease. Other conditions that more rarely cause Angina Pectoris include aortic valve disease, left ventricular hypertrophy, anemia and a variety of metabolic disorders. Angina Pectoris due to functional abnormalities of the small intramural coronary arteries has been postulated in syndrome X but the case is not proven and it is likely that in the majority of patients with normal coronary angiograms, the etiology of chest pain is non-cardiac.

The sequence of events after the onset of myocardial ischemia is known as the ischemic cascade. Early left ventricular dysfunction is a characteristic, which in itself may cause a further fall in coronary blood flow. A vicious cycle is set up where increasing heart rate and blood pressure raises myocardial demand, and shortened diastolic times reduce coronary blood flow. Recurrent episodes of ischemia lead to adaptive changes in myocardial metabolism and “hibernation”, resulting in chronic but potentially reversible left ventricular dysfunction.

Risk factors for atheromatous disease that are modifiable (present in almost 50 per cent of patients) include smoking, hypertension, high cholesterol and diabetes mellitus. Of these, smoking is by far the most important, (see: how to quit smoking). Although cholesterol levels are significantly higher in patients with angina compared to others, there is considerable overlap between the groups. In about 80 per cent of patients with Angina Pectoris, cholesterol is within the normal range, as defined by controls.