What is Penorit Used For? > Indications 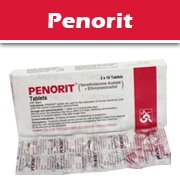 Penorit Tablet is a hormone preparation for the treatment of the non-occurrence of menstrual periods in certain cases (secondary amenorrhea). Treatment with Penorit should not be carried out until at least 8 weeks have elapsed since the last menstruation and the existence of pregnancy has been ruled out.

When to avoid Penorit Tablets? > Contraindications

Penorit should not be used in women who currently have the following conditions:

After excluding the existence of pregnancy, 1 tablet of Penorit is taken with a little fluid on two consecutive days. After 3-6 days on average a menstrual-like bleeding of normal intensity occurs. In some patients 15 days may elapse before bleeding occurs.

If this bleeding does not occur, then further diagnostic and therapeutic are required.

Penorit Tablets may only be used when pregnancy has been ruled out.

Use of Penorit in Nursing Mothers

Small amounts have been identified in the milk of nursing mothers, and a few side effects on the child have been reported, including jaundice and breast enlargement. In addition, oral contraceptives, given in the postpartum period may interfere with lactation by decreasing the quantity and quality of breast milk.

How Penorit interacts with other Drug?

Reduced efficacy and increased incidence of breakthrough bleeding and menstrual irregularities have been associated with concomitant use of rifampicin. A similar association though less marked, has been suggested with barbiturates, phenylbutazone, phenytoin sodium, and possibly with griseofulvin, ampicillin and tetracycline.

Do not take Penorit or any other prescription drug without asking a qualified healthcare professional.