Mycelex (Clotrimazole) is a broad spectrum antimycotic with fungicidal action for skin infections.

Mycelex is for external use only.

What Is Mycelex Used For? – Mycelex Indications 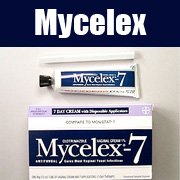 Mycelex Is Contraindicated If…

Do not use Mycelex if the patient is hypersensitive to clotrimazole or any of the ingredient of this formulation.

Apply small quantity of Mycelex Skin Cream or Solution thinly 2-3 times daily to the affected parts and rub gently until absorbed, preferably at night. Treatment should be continued for one month or at least for two weeks after the disappearance of all signs of infection (to prevent relapse).

The following side effects have been reported in connection with the use of Mycelex cream and solution:

If irritation or sensitivity develops with the use of Mycelex, treatment should be discontinued and appropriate therapy instituted.