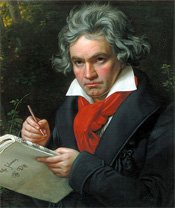 Tinnitus seems to be the voice that gives warning to the sufferer that something in life is out of whack, that something is not right, and something must change. In fact, it’s an old wives tale, that if you have ringing in your ears, God is trying to tell you something and it is up to you to decipher what that something is.

Ludwig van Beethoven was born December 16, 1770 in Bonn, Germany. Ludwig’s ears were, perhaps, damaged by his father when he was just a boy. It was known that his father would drag the child out of his bed to beat musical genius into him. He developed Tinnitus, which would come and go in varying degrees. By the time he was 31 years of age, the whistle and buzz in his ears was constant. Low speech tones were unintelligible and shouting was unbearable, meaning he probably also suffered from hyperacusis. By the age of 47, he was completely deaf and remained so until his death in 1827.I am sure, like everyone else to develop Tinnitus, he felt positively mad at times.

My ears whistle and buzz continually day and night.

I can say I am living a wretched life.

This is happening to over 36 million Americans. Of these, about 12 million have Tinnitus severe enough to seek medical attention. 7 million no longer lead normal lives. Of these, 2 million are disabled. Up to 400 million people are affected worldwide. Of these millions, many have been diagnosed as having Meniere’s Syndrome/Disease as well. And, of all these millions, there are no studies to conclude how many of these people are Highly Sensitive People or if being highly sensitive is even a factor.

Over 90% of all Tinnitus sufferers share four things in common; hormonal imbalances, sinus issues, anxiety, and/or nerve damage of the inner ear. All four of these conditions can all be remedied. Tinnitus sufferers also share sensitivity to gluten found in grain products.