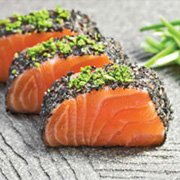 One nutrient that has in recent decades been overlooked or dismissed as not being of great importance is protein. The government and popular health writers have all discussed how we need to limit our intake of fat, and this has caused a disaster called the obesity. The avoidance of fat has led to the avoidance of meat, and since meat comes with a healthy dose of both fat and protein, many men do not get enough of either.

The upshot here is that humans as well as other animals (down to the fruit fly) strongly regulate the amount of protein they consume, since it is a critically important nutrient. When foods that are relatively “dilute” in protein are consumed, more food (and more calories) are eaten in an attempt to increase the amount of protein. Hence the consumption of empty junk food low in protein – think potato chips, sodas, Starbucks milkshakes, bagels, the list is nearly endless – can cause higher calorie consumption, leading to overweight and obesity. So, seemingly paradoxically, eating meat and other foods high in protein can help men stay lean.

Protein also has huge effects on health. Inadequate dietary protein can result in immune dysfunction and oxidative stress, which in turn can lead to premature aging. Sarcopenia is the condition of muscle wasting seen in older people, and sufficient dietary protein can prevent it.

Not All Protein is the same!

It’s important to note that not all protein is the same; it varies greatly in quality. The reasons for this are at least two. One, protein is made up of amino acids and the content of these varies with the protein source; for instance egg and legume protein have differing amino acid contents and their value as protein sources varies with this. The second reason is that the body uses dietary protein to synthesize its own proteins, and needs amino acids to be present in the right proportions within a short time window.