What is Blotim Eye Drops Used For? 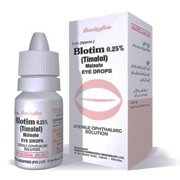 Shifting From Other Drugs

Add one drop of Blotim 0.25% twice-a-day to the usual daily routine of the drug already in use. On next day, use only Blotim 0.25% if the response is inadequate, switch over to Blotim 0.5% one drop twice-a-day.

When more than one anti-glaucoma drugs are in use, the doctor should decide on patient to patient basis. It may be possible to discontinue some or all other agents. Adjustment should be made to one drug at one time. Blotim, when used in addition, is also effective in lowering IOP in patients who respond inadequately to the maximum dose of other anti-glaucoma drugs.

Blotim is one of the safest drugs used in glaucoma, however, rarely some of the patients may experience, the following side effects.

Ocular irritation (conjunctivitis blepharitis and keratitis), visual disturbance including refractory changes due to withdrawal of miotics, diplopia and ptosis.

Aggravation or precipitation of certain cardiovascular, pulmonary and other disorders presumably related to beta-blockers, have been reported. These include bradycardia, arrhythmia, hypotension, syncope and bronchospasm (predominantly in patients with preexisting: bronchospastic disease). Respiratory failure, congestive heart failure and masked symptoms of hypoglycemia in insulin dependent diabetes have been reported rarely.

Other side effects of Blotim Eye Drops include headache, asthenia, nausea, dizziness, depression, localized or generalized rash and urticaria.