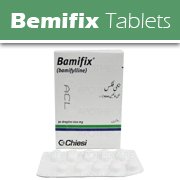 Bamifix Tablet contains bamifylline, a methylxanthinic derivative with two side chains in position 7 and 8, distinguishing it clearly from theophylline.

Bamifix has no Exciting Effect on the CNS

Unlike theophylline, Bamifix (bamifylline) usually has no exciting effects on the central nervous system. Its pharmacokinetic characteristics are very interesting. Its absorption, both by oral and rectal route, is rapid, reaching the plasma peak between the first and the second hour. Its diffusion in the extravascular area is high, with a distribution volume equal to 1000 liters.

Bamifix is rapidly metabolized to give 3 metabolites, also active and marked by high plasma concentrations. The prolonged activity of the drug allows for two daily administrations only. The final elimination half-life of Bamifix is of 17.5 hours. The excretion mostly occurs by urinary route.

Bamifix shows a high therapeutic index, due to the wide interval between the minimum active and the maximum tolerated plasma levels (0.18 and 20 ug/ml, respectively). The twice-daily administration of Bamifix Tablet leads to plasma levels of steady-state within 3-5 days both for bamifylline and its metabolites.

When to Use Bamifix Tablets? > Drug Indications

Bamifix tablets are used to treat the following medical conditions;

When to Avoid Bamifix? Contraindications

Bamifix Tablets should not be administered to neonates and children in the first infancy. Patients with severe heart failure, serious hypertension, hepatic and renal insufficiency, gastric ulcer and hyperthyroidism.

Usually 1 tablet of Bamifix in the morning and one in the evening before meals. Dosage can vary from 900 to 1800 mg daily according to medical advice. Do not administer this drug at short intervals.

Bamifix should not be administered to children

Tests on reproduction showed that Bamifix (bamifylline hydrochloride) does not influence fertility, pregnancy, lactation and the embryofetal development. However, it is advisable not to administer the drug during the first months of pregnancy, as a precautionary measure. Under treatment with bamifix, during pregnancy, no cases of neonatal toxicity were observed. However, it is advisable not to take the drug during the last days of pregnancy and during lactation.

Cases of headache or gastralgia were seldom reported. Doses higher than the therapeutic ones can induce the onset of nausea and slight distal tremors disappearing with therapy reduction. Allergic reactions such as urticaria, itching, rash, dermatitis have also been observed.

How Bamifix interacts with other drugs?

No interactions with Bamifix (bamifylline) are known. However, those known for theophylline should be considered. Erythromycin, lincomycin, clindamycin, allopurinol, cimetidine, anti-flu vaccine and propranolol can increase the serum concentration of theophylline; phenytoin, other anticonvulsants and cigarette’s smoking can decrease theophylline serum levels.

Bamifix should not be administered with other xanthinic compounds and caution should be taken in case of combination with ephedrine or other sympathomimetic bronchodilators.