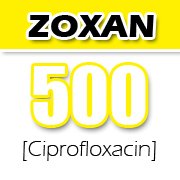 Zoxan is a synthetic broad spectrum antibacterial agent for oral administration. It belongs to the fluoroquinolone group of antibiotic drugs. Each Zoxan Tablet contains Ciprofloxacin 250 mg or 500 mg.

Zoxan has invitro activity against a wide range of gram-positive and gram-negative organisms. The bactericidal activity of Zoxan results from interference with the enzyme DNA-gyrase which is needed for the synthesis of bacterial DNA.

What is Zoxan (Ciprofloxacin) Used For?

Zoxan is indicated for the treatment of infections caused by susceptible strains of the designated micro-organisms in the conditions listed below.

Zoxan (Ciprofloxacin) is contraindicated in persons with a history of hypersensitivity to Ciprofloxacin or any member of the quinolone class of antimicrobial agents.

The safety and effectiveness of Ciprofloxacin in children, adolescents (less than 18 years of age), pregnant women and lactating women have not been established.

Serious and fatal reactions have been reported in patients receiving concurrent administration of Ciprofloxacin and theophylline.

Zoxan Tablet is rapidly and well absorbed from the gastrointestinal tract after oral administration. The absolute bioavailability is approximately 70% with no substantial loss of first pass metabolism. Zoxan achieves peak plasma concentration within 1 to 2 hours after oral dosing. Mean concentrations 12 hour after dosing with Zoxan 250 mg Tablets and Zoxan 500 mg Tablets are 0.1 and 0.5µ/ml respectively.

The serum elimination half-life of Zoxan in subjects with normal renal functions is approximately 4 hours. Zoxan is available in high concentration in body fluids and tissue at B.I.D dosing. Approximately 40-50% of an orally administered dose is excreted in the urines as unchanged drug. After an oral dose of Zoxan 250 mg, urine concentration of Ciprofloxacin usually exceeds 200 mg/ml during the first two hours and are approximately 30 mg/ml at 8 to 12 hours after dosing. The urinary excretion of Zoxan is virtually complete within 24 hours after dosing. Thus, active tubular secretion would seem to play a significant role in elimination.