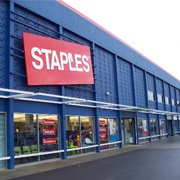 Staples is an Office Supplies Giant that owns and operates more than 3000 retail stores in 26 countries across Americas, Europe and Australia. Headquartered in Framingham, Massachusetts, Staples was founded in the year 1986. Millions of people visit Staples Stores to buy office supplies, janitorial supplies, office furnishing, tech: hardware and a lot more. In this post I am going to introduce you to some of the best Office Supplies Stores like Staples. All of these stores offer similar quality products & some of these are also cheaper than Staples. Below is a list followed by some basic introduction and links to the official websites of Top 10 Stores Like Staples.

Office Depot is a publically traded company that specializes in office supplies. Headquartered in Florida, United States, Office Depot was founded in the year 1986. Presently, Office Depot operates over 1900 retail stores across North America. The price range and quality of stuff & services offered by Office Depot is comparable to Staples.

OfficeMax is a chain of retail stores that specializes in office supplies. Originally founded in the year 1988 and headquartered in Boca Raton, Florida, OfficeMax is now a fully owned subsidiary of Office Depot Inc. OfficeMax is another great alternative to Staples to buy a variety of high-quality products including paper, ink, toners, furniture, school supplies and much more.

Target (or Target Corporation) is the second largest American chain of retail stores. Headquartered in Minneapolis, Minnesota, Target is a publicly traded business that was founded in the year 1902. Target stores sell a wide range of products that includes (but not limited to), Office Supplies, clothing, cosmetics, footwear, furniture & houseware, sport equipment and a lot more. Such a huge variety of products & great prices make Target a very good alternative to staples.

Quill (or Quill Corporation) is a subsidiary of Staples and it was founded in the year 1956. According to a recent estimate, Quill stores carry over a million products under hundreds of categories. Quill is a very good place to buy almost everything you can buy at Staples and according to BBB, Quill is an A+ accredited business.

WB Mason is one of the oldest and major American chains of Office Supplies Stores. Headquartered in Brockton, Massachusetts, WB Mason was founded in the year 1898. WB Mason sells a huge variety of workplace products, making it another very good alternative to Staples. Last year, WB Mason generated almost 2 billion US Dollars in revenue.

Walmart > #6, Workspace Products, Furniture & Everything Else That Staples Has to Offer.

Amazon is the largest internet-based retailer on the planet. Headquartered in Seattle, Washington, Amazon was founded in the month of July, 1994. Every day, millions of people visit Amazon.com to buy Almost Everything you can find at Staples. In the year 2015, Amazon generated over 107 billion Dollars in annual sales.

Levenger is an American chain of specialty stores that sells innovative workplace products. in addition to the regular office supplies, Levenger designs, markets and sells a beautiful range of professional accessories. Some of the most popular products designed and sold by Levenger include Pocket Briefcases, Lap Desks, Totes and Cases for Personal Electronics.

Kmart is another famous chain of retail stores that can also be a cheap alternative to Staples. Kmart was founded in the year 1899, presently, the company operates almost 1000 retail outlets across the United States. Kmart is very popular for its discounted rates on a wide range of products that includes (but not limited to) Office Supplies, Clothing & Shoes for men, women and kids, bed linen, cosmetics, electronics and toys. Kmart ships its products to over 100 countries in Americas, Europe, Africa, Asia, Middle East and Australia.

Sears is another renowned chain of retail stores in the United States. Headquartered in Hoffman Estates, Illinois, Sears was founded in the year 1886. Because of its vast range of product portfolio, Sears can be a great alternative to many companies including Staples. The primary product categories at Sears Stores include Office Supplies, clothing, footwear, outdoor equipment, tools, bedding, furniture, jewelry, beauty products, electronic appliances, housewares and a lot more.