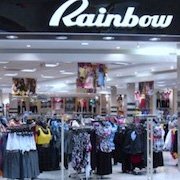 Rainbow (or Rainbow Shops) is a New York based, privately owned company that was founded in the year 1935. Headquartered in Brooklyn, New York, Rainbow is famous for its good quality and low-priced range of clothing, shoes, activewear and accessories for women and kids. In this post I am going to introduce you to some of the best stores like Rainbow Shops. All of these stores offer similar quality products & the price range is also comparable to Rainbow. Below is a list followed by some basic introduction and links to the official websites of Top 10 Stores Like Rainbow.

Charlotte Russe is a great alternative to Rainbow for teenage girls and women. The company also offers a good collection of plus-size dresses and activewear. Founded by Daniel Lawrence in the year 1975, Charlotte Russe is named after a famous French dessert. The most popular product categories at Charlotte Russe include Dresses, Tops, Jeans, Bottom, Lingerie and Swimwear.

Rue 21 (previously Pennsylvania Fashions Inc.) is an American chain of retail stores that specializes in stylish clothing for teenagers and men & women in their early twenties. Headquartered in Warrendale, Pennsylvania, Rue 21 is a privately owned business that was founded in the year 1976. Presently, the company operates over 1100 retail stores across the United States. The price range and quality of stuff at Rue 21 is comparable to Rainbow Shops.

Wet Seal is an American Chain of specialty stores that offers cost-effective and trendy fashion clothing for girls and young women. In addition to its in-house products, Wet Seal also sells clothing from other low-priced brands. Wet Seal is a good alternative to Rainbow and I assure you that low-price doesn’t mean low quality.

Deb Shops is a good alternative to Rainbow Shops to buy plus-sized clothing for women. Founded in the year 1932, Deb Shops is headquartered in Philadelphia, Pennsylvania. In addition to a fairly-priced range of clothing, Deb Shops also offers a good range of shoes, bags and accessories including Jewelry, Headwear, Socks, Scarves and Sunglasses.

Citi Trends is a publicly traded business that runs more than 500 clothing stores in the United States. Headquartered in Savannah, Georgia, Citi Trends was founded in the year 1958. Citi Trends is a good and cheap alternative to Rainbow to buy dresses, fashion accessories and shoes for men, women, boys and girls.

Gymboree is a good alternative to Rainbow to buy clothing for boys, girls and toddlers. The most popular product categories at Gymboree stores include Sweaters, Hoodies, Outerwear, Pants, Shorts, T-Shirts, Sleepwear and shoes. Headquartered in San Francisco, California, Gymboree was founded in the year 1976. Presently, Gymboree brand is available at some 1000 retail stores across the United States, Puerto Rico and Canada.

Old Navy > #7, Affordable Clothing Stores for Everyone at Home

Target > #8, Sells Everything You Can Find at Rainbow Shops

Target (or Target Corporation) is the second largest American chain of retail stores. Headquartered in Minneapolis, Minnesota, Target is a publically traded business that was founded in the year 1902. Target stores sell a wide range of products that includes (but not limited to), clothing, cosmetics, footwear, furniture & houseware, sport equipment and a lot more. Such a huge variety of products & great prices make Target a very good alternative to many stores including Rainbow.

American Eagle is a publicly traded business that specializes in trendy clothing, stylish footwear and accessories for men and women. If you are interested in a clothing & shoes retailer that offers good quality at reasonable price, American Eagle is highly recommended for you. Headquartered in Pittsburgh, Pennsylvania, American Eagle presently operates over 950 retail clothing stores across the United States.

Like Rainbow Shops, Lands’ End sells clothing and shoes for women and kids. The company also offers the same for men as well. The most popular product categories at Lands’ End include home decor, beach towels, hats and school uniforms. Headquartered in Dodgeville, Wisconsin, United States, Lands’ End was founded the year 1963.