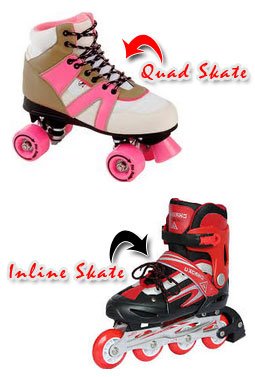 Roller Skates (quad skates) have four wheels oriented in a rectangular shape, two in front and two in back. Inline Skates have between three and five wheels (usually four) lined up one behind the other. Whether you end up skating in quad skates or inline skates is a matter of preference. Your choice will depend on the kind of skating you decide you want to pursue, and your budget. All types of skates can do the same kinds of things. But some are better for jumping, and others are better for going fast. Some are better for intricate footwork, while others are better for going straight. Keep reading to learn what the difference between a Roller Skate and an Inline is.