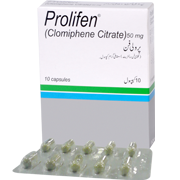 An initial test cycle with Prolifen 50 mg (1 capsule) a day for 5 days between meals. In the case of patients with menses present or in whom the menses must be induced by administration of progesterones, treatment should be started approximately on the 5th day of the cycle onwards. In patients who have not had recent uterine hemorrhages the treatment with Prolifen can be started at any time.

Prolifen Dosage in 2nd Cycle of the Treatment

If ovulation occurs with this dose there is no need to increase Prolifen dosage in the following treatment cycles. If after the first test cycle ovulation does not occur, a second treatment cycle can be started after 30 days of the first one, lasting for 5 days with Clomiphene 100 mg (2 Prolifen capsules) a day in two doses between meals. Prolifen Dosage must never be higher than 100 mg/day and treatment has not to be continued for more than 5 days.

If necessary, a third treatment cycle may be given in the same manner. Most of the carefully selected patients will have ovulation during the first cycle. Amenorrhea lasting for a few years might make the endometrium less sensitive, and two or three cycles might be necessary.

Once ovulation has occurred, to achieve a regular ovulatory cycle it is important to start each treatment cycle on the 5th day of the menstrual cycle. The number of treatment cycles must be determined by the physician.

If pregnancy does not occur after 6 treatment cycles, it is unlikely that another cycle will be successful and further treatment is not recommended. Patients who wish to become pregnant should be informed of the great importance of selecting the appropriate time for coitus.

As it still has not been demonstrated that prolonged cyclic treatment does not have side effects, Prolifen must not be administered as a monthly maintenance treatment in patients who fail to ovulate when treatment is suspended. In patients with amenorrhea or oligomenorrhea, treatment with Prolifen if effective, restores regular menses with ovulation.

A simple and relatively safe method to establish whether ovulation has taken place even in patients under treatment for anovulatory hemorrhage, is to measure the temperature increase that occurs during the luteal phase (basal temperature). It can be considered that ovulation has occurred if the patient has found an increase in the basal temperature which is maintained for 10-12 days and followed by menses.

The presence of menses not preceded by the normal increase in basal temperature or a prolonged increase in temperature not followed by menses, must be considered as a negative response. To avoid the administration of Prolifen during the first period of pregnancy, if the basal temperature is biphasic and is not followed by menses, it is necessary to examine the patient carefully to determine the presence of an ovarian cyst and carry out a pregnancy test. The next treatment cycle must not be started until an exact diagnosis has been made. The basal temperature test may be completed with a cervical smear, vaginal cytology and biopsy of the endometrium.