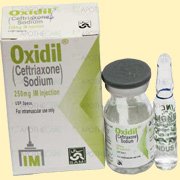 Oxidil (chemically ceftriaxone sodium) is an injectable antibiotic that belongs to the 3rd generation of Cephalosporin class of antibiotics. Oxidil is a broad-spectrum antibiotic with a high degree of activity against Beta lactamases. On this page you are going to discover general information about Oxidil Injection including available strengths, indications, contra-indications, dosage, side effects, drug warnings and use in pregnancy.

Each Vial of Oxidil contains sterile powder of Ceftriaxone Sodium and this formulation is available in three strengths;

Oxidil binds to penicillin-binding proteins located on walls of susceptible organisms and exerts strongly bactericidal action by inhibiting the synthesis of dipeptidoglycan, a substance necessary for bacterial cell wall strength and rigidity, thus killing the bacterium. This drug is active against a wide variety of gram-positive and gram-negative bacteria and has potent activity against all the Enterobacteriaceae. Oxidil Injection is also very effective against some organisms that are resistant to 1st and 2nd generations of Cephalosporin antibiotics, aminoglycoside and penicillin. These organisms include Haemophilus influenzae, Neisseria meningitidis, Neisseria gonorrhoeae, Escherichia coli, Klebsiella pneumoniae and Serratia marcescens.

Oxidil Injection also has some activity against Treponema pallidum. Clinical investigations indicate that primary and secondary syphillis respond well to this antibiotic. This drug is highly resistant to hydrolysis by both R-plasmid and chromosomally mediated B-lactamase (Penicillinases & cephalosporinases) of both gram-positive and gram-negative bacteria.

When To Use Oxidil Injection? > Indications

Oxidil injection is used to treat a variety of infections caused by susceptible organisms. Clinical studies have shown This drug to be very effective for the treatment of following;

Oxidil Injection is contraindicated in patients with known hypersensitivity to the Cephalosporin Antibiotics. When treating individuals, hypersensitive to penicillin, the possibility of allergic cross-reactions should be born in mind. Although the relevant preclinical investigations revealed neither mutagenic nor teratogenic effects. Oxidil Injection should not be used during pregnancy unless absolutely indicated.

Use of Oxidil Injection is not recommended in hyperbilirubinemic neonates, especially those who are premature. Oxidil (Ceftriaxone sodium) can displace bilirubin from binding to serum albumin, potentially leading to bilirubin encephalopathy.