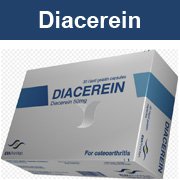 Generally, the drug has been well tolerated. However, the most commonly reported Diacerein side effect is acceleration of the intestinal transit (diarrhea) is reported in almost 37% of the patients. Few cases of abdominal pains have been described. The modification of the dose in the initial periods of the treatment (2 to 4 weeks) has allowed to surpass or to diminish these adverse events.

Other Diacerein side effects include urine discoloration in 14.4% cases and a single case of hypokalemia, hepatotoxicity resulting into acute hepatitis and fatal toxic epidermal necrolysis (Lyell’s syndrome).

The clinical studies have demonstrated the absence of interaction between the drugs such as; warfarin, tolbutamide, aspirin (acetylsalicylic acid), chlorpromazine, indomethacin.

In cases of overdose it can produce a profuse diarrhea. The treatment must be symptomatic with correction of any electrolyte imbalance which may be necessary.

Hypersensitivity to diacerein or any of the components.

Diacerein Use in Special Populations